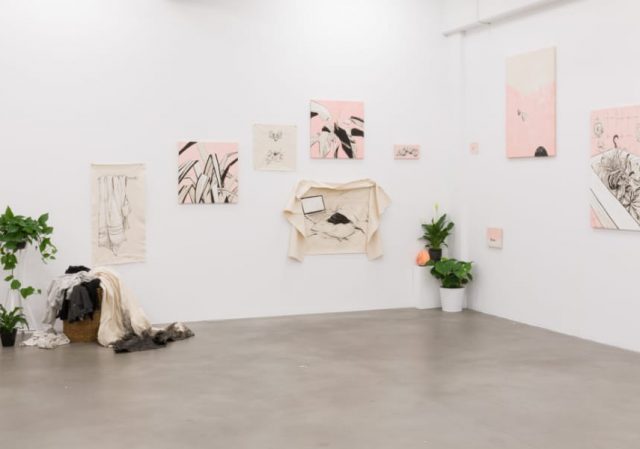 It's okay, to not feel okay.

Katie So wants you to know that it’s okay sometimes to watch Netflix and eat chips under a blanket. In her latest series, “Take Care” the East Vancouver-based artist explores mental health and the different aspects of self-care through depictions of simple domestic rituals that can make you feel safe.

It’s a topic close to Katie’s heart, and one that she’s explored since the beginning of her career as an artist. She first found herself in the DIY comic scene creating “autobiographical comics about being miserably depressed”. Initially, she was just trying to make fun of herself, thinking she was the only one dealing with these challenges—but quickly realized she wasn’t alone when people kept telling her they felt the same way. She says that connecting with others about mental health through her art opens up the world, and can make you feel a little less small.

“Take Care” was created during her residency at Vancouver’s Burrard Arts Foundation (BAF). With a palette of black, white, and soft pink, the paintings portray an intimate environment that toe the line between cozy and heavy. It’s this line, the duality of self-care, that she wanted to portray. While her earlier work aimed to shine a light on what mental illness can feel like, “Take Care” goes one step further to explore what someone suffering from something like anxiety or depression can do to take care of themselves.

These simple acts of self-care—having a bath, taking a nap—can be critical components of a mental wellness routine, and Katie wants to emphasize their importance. But just as important, she says, is recognizing at what point you’re too comfortable. “Take Care” teeters in the balance between these two ends of the spectrum.

I chatted with Katie about “Take Care”, what a healthy and productive creative practice looks like to her, and what’s next on the horizon.

Interview is edited for clarity and brevity.

Tell me about your latest series, “Take Care”.

It was an interesting time because I started the [BAF] residency in January, and it was a 10-week residency, so I was supposed to be finished and out of the studio and hanging the show just around when quarantine orders were put in.

Initially, it was an examination of mental health practices in terms of self-care, and a lot of my work previously revolved around the same ideas surrounding depression and anxiety, so I wanted to start shifting the focus away from dwelling on the symptoms and the negative points of it, and onto something that’s more about how can you take care of yourself. There’s a fine line between self-care as something you need to do to maintain mental health, versus self-indulging in ways that are self-soothing to the point where they end up being detrimental to your mental health. It’s that line that I really wanted to articulate in that series, and so a lot of the pieces are very based in the environment.

I wanted to make the gallery space comfortable and feel sort of like a living room/bedroom space which is hard to do in a gallery that is already white and stark and cold, but that was my aim, to make you feel comfortable and cozy, and so a lot of the pieces have to do with being bundled up in blankets and that sort of thing.

How did you reflect that balance between self-care and self-soothing in some of the pieces?

Some of the pieces are raw canvas and they’re just pinned loosely on the wall. I wanted it to be salon-style and very casual, and evoke that sense of weight and comfort and a sort of shroud that can be really comfortable and warm and soothing but at the same time can be heavy and hard to peel off. So I wanted that gravity in some of the pieces that are hung that way in the show.

The show was supposed to just be an analysis of mental health in terms of self-care, but it was delayed because of the pandemic, and it ended up being something that a lot more people were able to relate to when it came out. I think it was something that a lot of people would have already connected with, but the fact that we were all in the same scenario all of a sudden and having to deal with some of these things—maybe for the first time—I think it was kind of fortuitous chain of events that were unfortunate for us as people, but good for the show in a weird way [laughs].

How do you maintain a productive creative practice that also feels healthy and balanced?

A big thing for me is recognizing when to take a break. I used to feel a lot guiltier when I wasn’t working all the time, but that just isn’t sustainable. There’s pressure to always be creating something new, but you don’t have to feel guilty if you take a day off to do something else. I think that it’s really healthy to maintain inspiration and creative thought processes through other means. So, I try to read a lot and watch movies that I find inspiring and listen to music. I try to go a lot easier on myself than I used to. If I’m not feeling it, if I’m feeling bad, the work I create probably isn’t going to be that great so I don’t have to push it. Listening to what you need is really important, and it’s also what my show is about too, listening to when you need to stay in bed for the day and also listening to when you should get out of bed.

What are you working on now?

I have a couple of series that I’m working on. One is inspired by quarantine. I usually have a disposable camera at my house, so I have stacks of photos from parties past, back in the day when I could have parties at my house and there were lots of people around. I have all these reference party photos, which out of context look pretty strange—there are costume parties and drinking games and karaoke parties—and I want to use those as a jumping-off point and do a series of larger-scale paintings with more colour in them based on these photographs.

If I get to put on a show, in all likeliness the gallery that it would be in would have to be fairly empty. So keeping that in mind as well, people viewing paintings of close social experiences that we don’t get to have right now, and how strange that will be to look back on. So I want to capture those moments that feel like a distant memory.

You can take a virtual tour of her show at the Burrard Arts Foundation alongside fellow resident Jackie Dives’ work here.