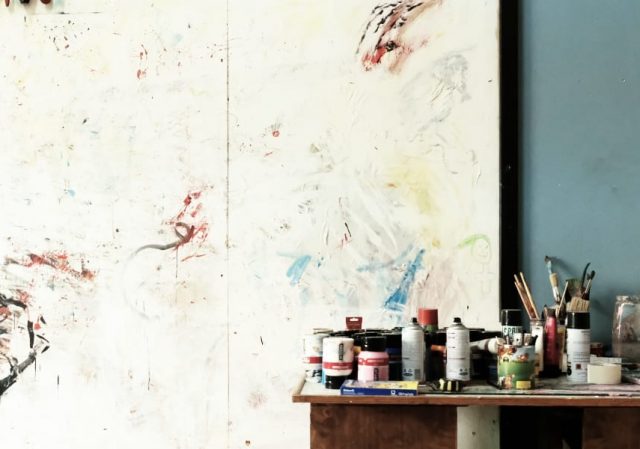 I have always felt that artists are the cultural and social sounding board of our society. What we might have trouble putting into words or expressing about a particular issue, artists seem to be able to capture that essence with the stroke of a paintbrush, a camera lens or through beautifully written prose.

When I first visited the Occupied Palestinian Territories, an area sandwiched between the borders of Israel and Jordan, I was overwhelmed with what I saw. Walls, barbed wire, checkpoints, armed soldiers and rules that defied imagination. Feeling angry, confounded, sad — I set out to better understand how generations of Palestinians within this decade’s long military occupation have continued on-going efforts of resistance despite so many (often infuriating) challenges. So I went looking for the artists.

Banksy might have brought international attention to these issues through the creation of the Walled Off Hotel and the massive graffiti murals that cover sections of the infamous separation wall. But before Banksy arrived, artists like Monther Jawbreh and Bashir Qonqar who grew up here had been grappling with these realities as refugees on their own land. As they grew up in these surroundings and were confronted daily with the challenges and restrictions of life under occupation both artists in their own unique way found a way to express their resistance by producing provocative and visually compelling work.

I had the opportunity to visit both artists in their studios in Bethlehem in 2017. They were generous with their time and their ideas. And while the political and social landscape may have shifted (for better or worse) since 2017, one thing that has remained constant is their commitment to exploring difficult political and social realities through artistic expression.

Here is a selection of photos taken from these studio visits, which show a glimpse of the compelling work of these artists.

‘As Once Was Known’ is a collection of work that revolves around Monther’s research and expanding the concept of Palestinian popular resistance.

Source: What is Known, by Monther Jawbreh.

Shedding light on two different era’s, the Palestinian face cover and Jasmine which is connected to children who died in Gaza, this piece is an attempt to rid the Palestinian kuffiyya — with it’s white and black colours — of it’s “symbolism” to change the concept of freedom fighter.

Source: What is Known, by Monther Jawbreh.

“The act of resistance is still present in the artwork as it transforms concepts to action; from a political idea to an artistic act. The work goes beyond direct expression and literal meaning towards a discussion on acts of resistance and the factors that influenced the conditions of how the original artwork was previously produced.”

[Life during COVID] is a strange feeling, people are afraid of each other, everyone is a suspect until he proves he has nothing. The system is not collapsing, but it is getting redesigned and people must act accordingly. In a way, all of this reminds me of my life back home in Palestine!

“My art is expressed through painting and mixed media, focusing mainly on human problems and behaviors, attempting to solve human questions and observations creatively. Criticism and sarcasm are central to my work. I try to focus mainly on the interactions, concerns and problems in the context of our daily life.”

The Power of the Vote