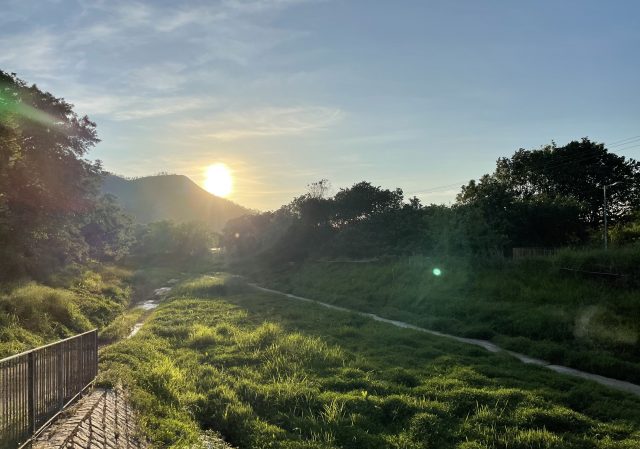 I never liked my Chinese name. First of all, it was hard to write (The vivid image of me crying when learning to write my name the night before going to kindergarten still haunts me). Secondly, it’s a rare (Frankly, this is quite a polite way to describe it. I was teased in primary school because other kids thought it was rustic) surname, Tin. Tin (田). In Chinese, my surname means “fields and farmland” where crops are grown and animals are kept. As a matter of fact, my family does come from a farming background.

Here’s a song for you while you read. Just sit back, relax and enjoy!

Life was not easy in the 60s. My dad and his six siblings were raised in the suburbs of Hong Kong. Grandpa and Grandma were farmers and sold crops for living until Dad graduated from university. Everyone moved out after they had begun accomplishing milestones in their career, leaving Grandpa and Grandma alone in the village. So I am an urbanite. Though I spent my childhood at Grandma’s place before I started going to school, now I seldom go back. The country life has always felt strange to me, the unkempt environment and the lack of upward social mobility were things I could not relate to having been raised in the city.

Recently, there has been an increase in local tours that take locals in Hong Kong to different parts of the city as we cannot travel abroad. One of my friends asked me to join her for a “down-to-earth” and local farming experience. I sarcastically thought to myself “Wow, what a charming invitation. How exciting.” I personally never found farming or labor-intensive work thrilling in any way, but my friend insisted on the experience. So we compromised- I decided to take her to my Grandma’s farmland so we could explore hidden parts of the city without paying a penny.

So the journey began. We plucked up the courage, geared up and dived into the “mysterious unknown” in the parts of New Territories. Yet to my surprise, the first 15 minutes were great – being surrounded by clear blue skies, fresh earthy air, songs from creatures that I cannot name, different shades of green and Grandma’s welcoming arms. Maybe wearing the hat of a tourist with fresh eyes revisiting the place would be a good idea? Okay, I got this. Let’s put aside the urbanite prejudice for a day and enjoy it as a local tour. I mean at its worst, at least the experience would be worth an Instagram post, right?

We geared up and began our journey towards the New Territories. I was pleasantly surprised within the first 15 minutes. We were under clear blue skies, smelling fresh air, and listening to songs from creatures that I cannot name. We were surrounded by different shades of green and embraced Grandma’s welcoming arms. Perhaps experiencing Grandma’s home with a new perspective would be fun? At least we’ll get some decent Instagram-worthy photos from the day, I thought.

Just when I thought things were looking up, things took a turn towards the uncomfortable. My forearms were filled with so many insect bites that some of the stings actually merged into one, forming a mini world map on my body. Grandma picked some plant leaves and advised me to rub them on the bites to ease the itchiness. The thought of doing that was already weird to me, especially when I was already hot and bothered from being under the sun without any cloud cover, and it was 35°C with 73% humidity that day.

I continued to loudly grumble about the weather and how uncomfortable I was, when Grandma handed me some freshly cut papaya from the farm. The delicious taste was instantly refreshing. Grandma slit the papaya in half and told us to enjoy it under the shade. For years, I have been enjoying fresh fruit as consumable items that could be conveniently bought at an air-conditioned supermarket at any given time, all year round. But all that changed the minute I took my first bite of freshly harvested papaya. I cherished every glorious bite and instantly stopped complaining.

I looked across the field at Grandma, she was plowing. Her back, arms and legs worked in great coordination, as if there was an invisible string connecting the three spots. Watching her farming skills was like watching a newly-oiled machine at work. Repeating the chores under the heat seemed like an effortless little dance that she enjoyed in the fields. I had never seen this side of her. I realizsed I had never made an effort to understand her heritage and love of her land. I haven’t had much appreciation for the old-fashioned ways of our culture, but on that day, I realized that we need to respect where we come from, our culture and our heritage with true respect and understanding of our families’ stories.

As we made our way back to the city, I looked down at my hands. My tanned and sunburned skin seemed to congratulate me on a hard day’s work where I came of age and connected with my heritage. The sun began to set and the clouds stayed low, dry dirt smoothly slipped from between my fingers and found its way back to Earth, but I took some back with me to the city under my fingernails. I didn’t think I’d like this feeling, now I know better. I’m a farm girl on the inside, I was born one.

Reminiscing the Taste of London