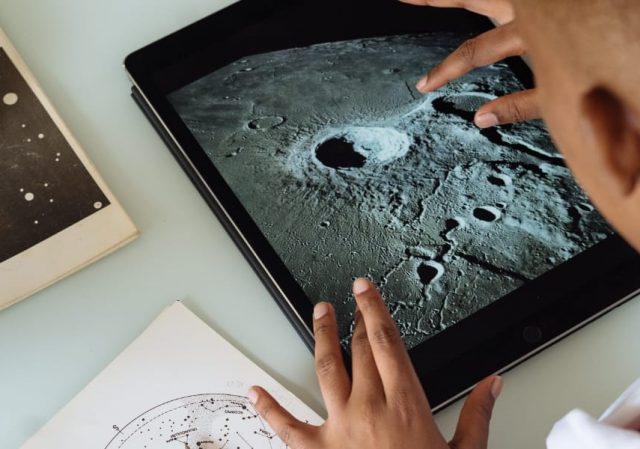 Humans have always felt a connection to the moon. The sun may sustain our very life, but in many ways the moon influences how we live it. Despite being just over a quarter of the Earth’s size, the moon quietly pulls Earth’s strings: it dictates the tides, inspired how we track time, and affects animal behaviour.

Over time, different cultures around the world have developed stories, rituals, and celebrations inspired by the moon, particularly when it’s full. From the ancient Sumerians developing the lunar calendar to tourists letting loose at Thailand’s full moon parties, the cratered planet has woven itself into the fabric of humankind.

This October 2020, the full moon will be making an appearance not once, but twice. Every few years—or, as the saying goes, once in a blue moon—a full moon happens two times in one month, and this time it’s book-ending October with a Harvest Moon on the 1st, and a Blue Moon on the 31st.

Given this special occurrence, it’s never been a better time to learn and reflect on the different ways the full moon is celebrated throughout the world.

It’s a traditional Chinese custom to celebrate a baby’s first full moon. For many Chinese mothers, the first month after giving birth is spent in confinement, resting and recovering. The baby’s full moon celebration, also known as a Red Egg and Ginger Party, is often the first time friends and family members get to meet the new baby.

The celebration’s name is literal: typically, the party will be hosted at a restaurant banquet in which vibrant red hard-boiled eggs and pickled ginger are featured. The colour red symbolizes luck and happiness, and the egg represents new life and unity. Ginger is considered a warming “yang” food and is typically eaten by a woman during the confinement period to restore her body’s qi energy.

Either at the party or around this same time, the baby will receive its first haircut. Traditionally, the one-month-old’s hair is shaved all except the crown of their head to make way for thicker growth, but in more modern traditions a family member will simply snip off a small lock. Following the cut, both the mother and baby are washed with pomelo leaf-infused water as a way to both cleanse them and protect against evil.

For many people Indigenous to North America, the moon represents divine feminine energy and is known as Grandmother moon. The moon cycle—which is roughly the same length of time as a woman’s menstrual cycle—is seen as a sacred gift to women, often referred to as their moontime. According to some teachings, women on their moontime become more intuitive around the full moon. It is seen as a time for them to tune into this intuition, rest, and focus inward.

When the moon is at its fullest, a woman can seek guidance from Grandmother Moon through ritual, which may look different depending on the teachings from community to community. Often, women of all ages gather in a circle around a fire to drum and sing. Sometimes tobacco is placed in the fire. A woman may bring water to a full moon ceremony as an offering to Grandmother Moon and the Earth, turning it into “moon water”: something she can drink as a nourishing tonic to support her during her cycle.

The moon plays an important part in Balinese ceremonies, folklore, and agriculture. Both the full and new moon hold special meaning—so much so, that if a religious celebration falls on either, the ceremonies are considered auspicious and extended for several days.

There is one Balinese story that provides an explanation for the lunar eclipse—when the moon, sun, and earth align and turn the moon a deep, glowing crimson.

One version explains that the Hindu demon Kala Rau sneaked into the Fountain of Eternal Life by pretending to be a god—but he wasn’t too clever for Vishnu, one of the main Hindu gods. Kala Rau’s punishment? Death by beheading. The story’s twist is that before Vishnu severed his head, Kala Rau managed to sneak a sip from the magical fountain—granting eternal life to just his head.

Kala Rau happened to be in love with the beautiful moon goddess, Dewi Ratih. His demonic love was a dark obsession, and he tried, as he continues to do to this day, to consume Dewi Ratih in the night sky. Sometimes, (as often as a lunar eclipse occurs!) he is successful. But it never lasts long; because Kala Rau doesn’t have a body, Dewi Ratih escapes soon after she is swallowed—until the next time she’s captured.

Create your own Ritual

These full moon ceremonies and stories are just a few of many across the world and have deep, sacred roots. For those of us who don’t have a personal connection, it’s important to respect the cultures that have fostered these traditions for centuries. If you’re invited to a full moon celebration, ask what is appropriate or do some research beforehand.

If you don’t have a full moon tradition of your own, think about creating one using ideas that are important to you personally. Perhaps it could involve an evening walk through nature. Or maybe it means connecting with people who are important to you. It could be a time to reflect and meditate on the past month and set intentions for the weeks to come.

This is about what feels right for you: ask yourself, what does the changing moon represent to me? What would be the most meaningful way to celebrate this?

No matter how many times you’ve seen a full moon, something about it always feels special. On October 1st—or whenever you happen to catch it next, let it serve as a reminder of the importance of celebration, the beauty of diverse cultural practices, and the incredible power of nature.

What To Do When You Can’t Stay Home

Turning Pages into a New Future