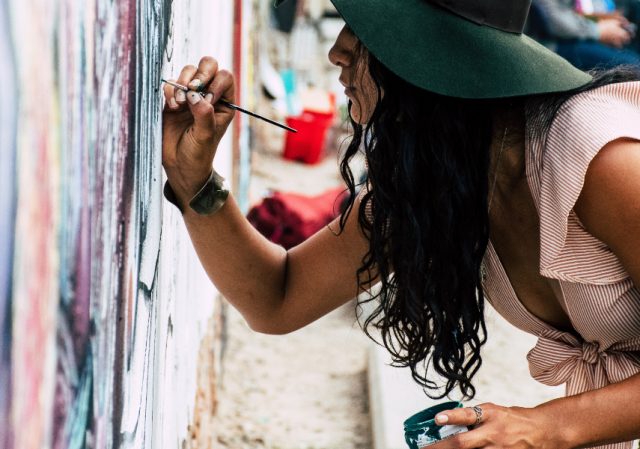 How artists and organizations are working to inspire social change.

Several years ago on a spring afternoon, I found myself standing on my university quad in front of a pile of bike tubes. Myself and a handful of other students had gathered to make an outdoor installation—not just for the purpose of art, but to protest.

We began tying the rubber tubes together, looping them around the oak trees that lined the field in front of the library. By weaving this black man-made material into the natural surroundings, we were disrupting the landscape to encourage conversations about how a proposed oil pipeline could harm a vital ecosystem.

The thought of an oil spill on our beloved and biodiverse coast was unthinkable—so we turned to art to get people’s attention. Unlike a list of stats or a bunch of graphs, art has a way of instantly cutting to the emotional core of a situation. Whether it’s about a romantic relationship, a piece of history, or an urgent social issue, artistic mediums speak to the human experience and elicit empathy in a way nothing else can.

LA-based activist Nora Rahimian agrees and says that one of the reasons art is such an effective vehicle for social change is that there’s trust between consumers and artists. Unlike politicians, she says, “who only show up when they want your vote,” artists are always there. “They’re with you when you’re breaking up with someone, they’re with you on the road trip, you follow their Instagram, they’re commenting on things that are happening in the world all the time, so there’s a sense that you know this person.”

Between an international uprising against racism, a global pandemic, and the ever-looming reality of climate change, artists’ abilities to create approachable entry points to difficult conversations has never felt more relevant or important. Thankfully, there are artists and organizations across the world who have made it their mission to use creativity to inspire social change.

The Centre for Artistic Activism (C4AA) in New York is one group that has dedicated themselves to helping artists, activists, and organizations effectively marry art and activism. “Action starts with a feeling, and art can unlock those feelings, questions, and curiosities. If people are to take part in social and environmental justice, they must first feel why it’s critical. The stories, spectacles, and surprises that art and creativity bring to the table are the fuel for people to take action for a better world,” says C4AA Co-Director Rebecca Bray.

Action starts with a feeling, and art can unlock those feelings, questions, and curiosities.

C4AA raises a critical point about why art is such an important tool for activists: that art—regardless of your class, race, gender—is something most of us already have access to. Those who are most marginalized, and experience the consequences of issues like racism and climate change most heavily, face additional barriers within the systems that hold the power to create change. But a paintbrush, a camera, a pen—these are a little easier to come by.

The organization offers a range of services like training workshops, consulting on campaigns and initiatives, research on artistic activism, and plenty of free resources for those looking to make a difference.

Rahimian, who I mentioned earlier, shares the calling to unite artists who want to create lasting change. Having grown up in Iran amidst the Iran-Iraq war and eventually leaving the country as a refugee, she knows first-hand how systems of oppression work. After moving to the United States and eventually attending UC Santa Cruz, it wasn’t long before Rahimian found activism as a way to help others affected by oppression. In Santa Cruz, she helped run gang intervention, prison abolition, and peacebuilding work initiatives, and has travelled as far as Liberia to participate in development work with former youth combatants of Liberia’s civil war.

Art is intended to evoke emotion—and that’s where the opening for change happens.

Rahimian has always believed in the power of art to shine a light on injustice but noticed how siloed independent artists are. So, with fellow activist and hip-hop lover Natalie Crue, she co-founded #CultureFix: a way for passionate creatives to meet and support one another to use their creativity and platforms to speak up about issues close to their hearts.

#CultureFix, who just celebrated its sixth anniversary, connects like-minded individuals to have conversations about anything from ethical fundraising, to the connection between sports and social impact, and what it means to decolonize love—and leave with information and tools to make their projects a success. It’s based on the idea that within their networks, they already have everything they need, eliminating the need to participate in structures that may cause further harm.

Dysturb is a nonprofit organization run by photojournalists that have been using photography to challenge traditional news mediums and raise awareness about urgent issues across continents since 2014. The Paris and Brooklyn-based group is composed of photojournalists, writers, and artists who have made it their mission to bring issues like the refugee crisis, climate change, and women’s rights to the forefront of the public’s mind.

How do they do it? By taking to the streets guerilla-style.

Dysturb’s approach is in-your-face: large-scale black and white photos were blown up and pasted on the side of city walls around the world. It’s easy enough to avoid looking at the news, but if an issue is literally in front of your face, coming directly from the person who took the photo, it’s impossible to ignore. By pasting mural-sized images of real people affected by these issues, they encourage conversation and action—without potential bias from mainstream media platforms.

Their most recent project is an awareness campaign to spread public health advisories related to COVID-19, to help battle against an “infodemic”, or misinformation that could lead to unsafe practices among the public. For this campaign, Dysturb teamed up with different photography groups, infectious disease experts, and illustrators to ensure crucial information is told in a way that’s easy to understand and grabs your attention.

Collaboration seems to be inherent in most Dysturb projects, from working with The United Nations Population Fund to help end female genital mutilation, to Contact Photo Festival to promote the work of 20 photojournalists capturing a variety of global issues, to the Magnum Foundation to help reframe climate change.

Thinking back to that day of artistic resistance with my fellow university students, the thing I remember most clearly are the reactions of the campus community. I can still recall the different students we talked to that day who our installation instantly clicked with—the profound moments when they expressed what the coast meant to them, and their genuine desire to help.

This is what Rahimian says is the most important reason why art is so powerful. “Art is intended to evoke emotion—and that’s where the opening for change happens. You might see a video and it makes you feel things, and it’s coming from someone you trust, and that’s the moment where you start to shift the way you think or act…It’s not all facts and figures and logic—it’s emotional, so you can’t out-think it, argue it, or get defensive about it.”

To some people, our art project may have looked like just a bunch of bike tubes wrapped around trees—and to be fair, without any context that’s exactly what it was. But to other people, it was a reminder of what really matters, what we stood to lose, and a call to action.

Take Me to Greece