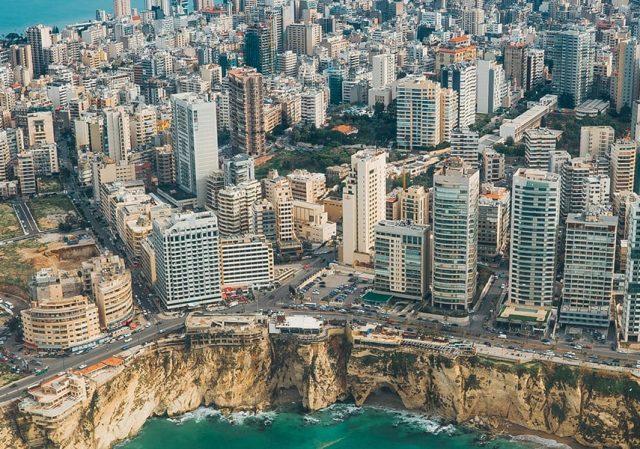 For people living in Beirut, Lebanon amid COVID-19, something new and beautiful has joined their daily rituals.

Beirut is not a quiet and retiring sort of place. This is a city that gets to the weekend and likes to do its hairs and put on its best outfit to show the rest of the Middle East how to have a good time. If the ‘Paris of the Middle East’ title that some marketing wag gave it in the 1960s no longer quite rings true, then at least fashionable Beirutis can put on a raucously Instagram-friendly party.

Of course, there are no parties these days. The coronavirus shut the city down by stealth – first, there were rumours that the museums and cinemas would close, then the restaurants and bars began to shutter. But Beirut is a city in love with home delivery almost as much as it is with eating out, and the streets began to be given over to flocks of delivery scooters, at least until the 7 pm curfew comes down and a strange silence falls on the city.

But in the quiet, we are learning to hear new sounds.

The air tastes different as well. Traffic started to drop off once non-essential businesses were closed but now the lockdown has gone even farther, with cars with odd- and even-numbered plates now only allowed on the road on alternate days. The occasional spring shower has taken even more pollution out of the atmosphere, turning the air crisp and fresh. The most popular images of the city shared on social media since the lockdown began are views from the surrounding mountains, looking down on a city no longer suffocating under its dirt yellow blanket of smog. If we can’t head out to take in the sight ourselves, at least we can breathe more cleanly in the interim.

Despite being confined to the balconies of our apartments, we have discovered that the fresh air has given voice to a dawn chorus whose existence could previously only been guessed at. Now, birdsong greets the sunrise and sunset and is the reassuring sound of nature refusing to be locked down. Throw in the scent of newly-blossomed jasmine and you get the hint of a city struggling to rediscover itself amid the current crisis.

“Fresh air has given voice to a dawn chorus whose existence could previously only been guessed at.”

Even the deeply honeyed tones of Fairuz, the singer who has always given voice to Lebanese dreams like no other, is being heard afresh. The 84-year-old artist was celebrated for not abandoning Beirut during even the height of the civil war, and at the beginning of April made a rare return to the public sphere by releasing a new video. Reflecting on the troubled times however, there was no music but rather a reading from the Book of Psalms.

Lebanon was struggling even before this medical emergency. Before anyone had heard of COVID-19, the buzzword of the past six months has been thawra (Arabic for ‘revolution’) rather than coronavirus. Protests against state corruption have been roiling since last October, with the value of the currency collapsing and the government defaulting on its debts for the first time in its history.

The fault lines of Lebanese society have been laid bare.

Coronavirus has exposed these even further, something that can be seen when shopping for groceries. Many of the smallest corner shops have literally barricaded themselves in, taking orders at a distance and handing bags of shopping over the threshold with gloved hands; those supermarkets serving the most comfortably off have guards on the door scanning shoppers’ temperatures, and refusing entry to those without masks. At least they ask for donations to the Lebanese Red Cross at the check-out.

Lebanon was one of the first countries in the region to lock down, and official medical pronouncements so far are bullish about flattening the curve. But no one is expecting Beirut’s nightlife to be returning anytime soon. For now, the resurgent birdsong is the new soundtrack to life in our city.

Paul Clammer is a travel writer based in Beirut, specializing in the Middle East, North Africa and the Caribbean. He was written more than 40 guidebooks for Lonely Planet, and is the author of the Bradt Guidebook to Haiti. Follow him on Twitter @paulclammer

Traveling Green? There’s a Guide for That