Living a Life of “Jishuku” 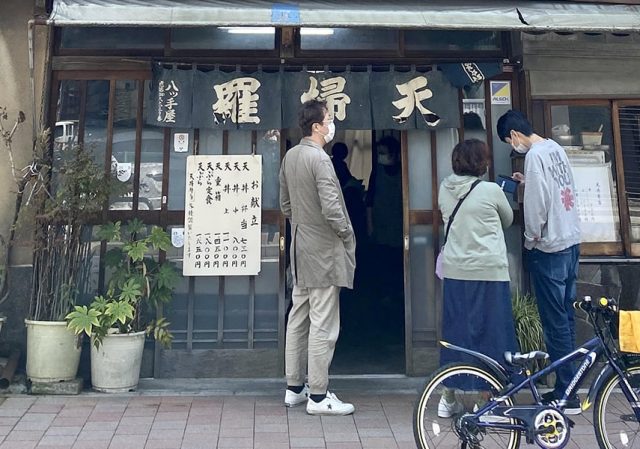 For residents in Tokyo, life has become a delicate balance between safety and self-restraint.

On April 23 it had been exactly a week since Prime Minister Shinzo Abe declared a nationwide state of emergency under the COVID-19 outbreak. It also marked a month since my company allowed me to telework. I took advantage of my lunch hour to make an off-peak visit to the tiny supermarket 10 minutes from my apartment in Kanda, an office district northeast of the Imperial Palace in central Tokyo.

Across the street, a few people were waiting in line outside a historical but dilapidated restaurant, nestled between modern buildings. It was a tempura establishment with 105 years of history. Though puzzled by it staying open amid such times, I succumbed to the tempting smell of sweet vegetables and hot oil in the air. The few people standing in line turned out to be waiting for their takeaway lunch boxes, a trend more common these days. A few office workers were seated in the tatami area, chatting.

Though the door of the restaurant was wide open for ventilation, the scene reminded me of the government’s “Three Cs” guidance: to avoid closed spaces, crowded places and close-contact settings. The elderly proprietress moved briskly around the restaurant, her big smile unobscured by a mask. I felt that I had stepped through the sliding door into a parallel universe from the world outside, where the term COVID-19 didn’t even exist.

“Are you still open during your regular hours?” I found myself asking the proprietress when she brought my made-to-order tempura bowl.

“Yes, 11 am to 2 pm on weekdays. We may close early if ingredients run out, though,” she answered matter-of-factly.

“That’s great. There must be so many office workers around here who appreciate your service.” I refrained from remarking “I am surprised that a family-run business like yours is still open. Aren’t you worried about COVID-19?”

However diplomatic my comment was, frequent customers do benefit from these businesses that stay open. Different from the strict stay-home approaches in most countries, the Japanese government calls on people to practice “jishuku,” which means self-restraint, by refraining from making non-essential trips and avoiding commuting to work. Compared with the “stay at home” and “shelter in place” lingo used in other countries, Japan is probably one of the few countries in the world that is staking its containment policy on its people’s self-discipline.

“The Japanese government calls on people to practice “jishuku,” which means self-restraint, by refraining from making non-essential trips and avoiding commuting to work.”

However, even the law-abiding Japanese people are not completely adhering to government guidelines, as the tempura restaurant patrons demonstrate. After all, it is merely a soft lockdown—public transportation remains in service, and the Prime Minister has emphasized that “jogging is not prohibited.” Most importantly, many still need to commute to work, as some companies have delayed implementation of clear work-from-home policies, and the Japanese zealous work ethic cannot just be transformed overnight.

“Japan is probably one of the few countries in the world that is staking its containment policy on its people’s self-discipline.”

As the number of cases continues to climb and Japan entered into the annual Golden Week holidays, the government has had no choice but to further urge city-dwellers to curtail customary visits to their hometowns during the holiday. Unfortunately, before the end of the holidays, the government already had to announce an extension of the state of emergency until May 31.

To be fair, if you consider the government’s goal of reducing human contact by 80%, it’s hard to argue that the government’s call for jishuku has been a failure. After all, the jishuku trend has also led to a boom in the food delivery industry, so much so that an Olympic fencing medalist has even begun working for a food delivery company so that he can stay active on his bike and earn some extra income.

As I made my way home, I passed by a ramen shop where the counter was packed full of diners. Life sort of goes on in Tokyo, doesn’t it? I thought, as I looked up and saw a Tokyo 2020 Olympics flag flying in the breeze. Well, people secretly hope that life goes on, as they seek a moment of peace in a parallel universe.