Big Changes: How Alex Cherney built his own Tiny House 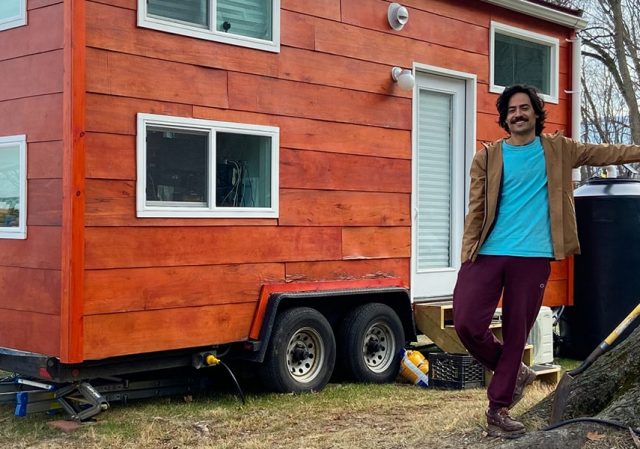 As freedom of journey has been restricted due to many factors outside of our control, there’s been a growing trend of people driven to abandon the physical anchor of materialism and embrace minimalism by turning to a nomadic lifestyle.

Many have cited this decision resulting from a turn inward — to discover how they’d like to move forward — as they searched to find new ways to reclaim control of their lives. And for many, that has meant living with less, but better.

In this piece, we connect with filmmaker and musician, Alex Cherney, on how he built his own Tiny House and the impact it’s had on his life.

Alex’s Tiny House also features a fully functioning recording studio. Listen to songs by Alex (aka Rey) that were recorded in the Tiny House while you read.

So, why a Tiny House?

When I decided to build a tiny house, I had never stepped foot in one. I binged Tiny House YouTube series, spent hours looking at photos, and just had this burning desire for the lifestyle it provided. That was enough to know it was the right move for me. Like many who travel the road to minimalist living, I was drawn to the financial, material, and mental freedoms it provides, as well as to spending my trip on Earth doing what I love: creating and entertaining through music and film.

What was the first step in that decision for you?

I think I literally woke up one morning and said ‘yea I’m going to build a tiny house’. When I start a project, I always complete it, and although I knew this would be an epic journey, I had no doubt that I would make it happen. I spent a few weeks browsing existing blueprints for wood-framed tiny houses, but just couldn’t find the perfect fit. I’ve always been drawn to architecture and functional design, so once I decided to draw the plans for my house, things got exciting.

What was the jumping off point in that process?

I started with the layout, taking inspiration from existing tiny homes and envisioning what made sense with my lifestyle. After dozens of drawings, I finally landed on a floor plan (that ended up being the final layout of my house to about 95% accuracy). The drawings of the walls took even more trial & error. I spent time studying architecture basics (door & window framing, studs 16″ apart…) and lots of time drawing a design that resonated with me— something that let in tons of light and was visually appealing as well.

How long did the actual build out take you?

About a year. It definitely could have been finished sooner but I was working / paying for the project as I went, and that mostly dictated the pace. I had lots of help along the way. I worked closely with a carpenter who took charge of the framing. An electrician, plumber friend, my mom and several other build-savvy friends helped along the way. With all of their help I built the tiny house of my dreams on a 20′ utility trailer, ready to be relocated. Initially, I thought that my tiny house would be entirely off the grid and that I would be moving my house fairly regularly, but after building it I realized that moving and setting it up for my lifestyle would be an epic task. After lots of searching and a bit of luck, I found a great piece of property on the water in Upstate, NY.

What’s been your favorite part about the experience?

There are so many positives that I’ve found with living tiny. For starters, I wanted something that made sense financially. I was able to build my house for well under $30K. That’s less than one year’s rent on an average one-bedroom in NYC. I also knew that if I ever outgrew my house I’d still be able to use it as a getaway / rental property.

I was drawn to the minimalist lifestyle it enforced. I can only fit so many items in the house… less clutter physically equals less clutter mentally, and after living in my house for a year, I can attest to that. I feel a sense of calm in my house, and since it’s manageable I’m not constantly worrying about upkeep.

And finally, and perhaps most importantly, I wanted to create a space that not only supported art-making but was art-making. I am a filmmaker & music, and I’ve always had a general love for creating things. The thought that I could draw out my dream house on paper and then one day live in that space was such a rewarding premise.

And the biggest takeaway from actually materializing this?

I remember when the frame of my tiny house was all closed in; I walked into my soon-to-be tiny house at night and felt the space for the first time. I looked out of the stick-frame triple window, and it felt entirely surreal. I was building a piece of art, an instrument even, that helped me live in an intentional and healthy way. It was a reminder that we really can accomplish whatever we set out for in life. That was my first time stepping foot in a tiny house.