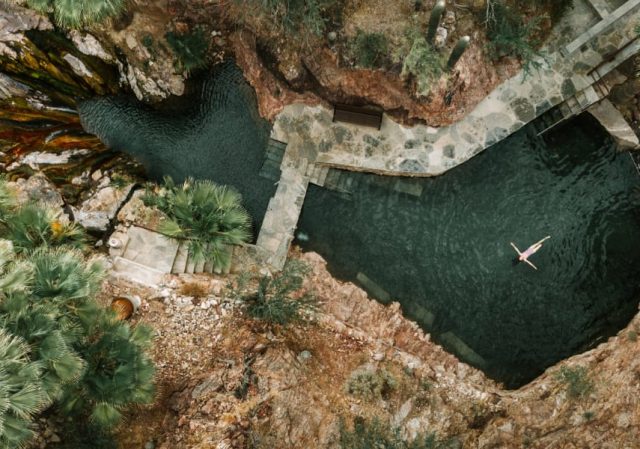 On my first trip to Japan, I fantasized about escaping the bustling Tokyo streets into the quiet retreat of Onsen, an ancient blissful spa-like experience. Yes, I was excited to get lost in the maze of the Golden Gai district, and get swept up in a sea of people crossing at Shibuya — but I craved this more than one thousand year tradition of submerging oneself in a mineral-rich steaming hot bath and letting relaxation consume me. Call me old-fashioned.

Ancient healing traditions from cultures all over the world fascinate me and have had the added benefit of soothing my travel-weary body. In Japan, which has nearly 30,000 Onsen spread out throughout the country, to a Westerner like myself, I was seduced by the idea of staying at a Ryokan (Japanese-style inn), being wrapped in a soft kimono and being anointed in this ritualistic experience.

Much like any new experience, however, one does need to be prepared for the awkwardness of being an outsider — and in this instance, without clothes. But before I talk about how to Onsen, it’s a good idea to share how and why this tradition even began.

Dating back to the 6th century, Onsen has been a mainstay purifying ritual within the Shinto religion. At the time, this bathing experience was designed to cleanse the mind and soul — not the body. And what was once available for the select few, such as monks and emperors, began to spread around the country available to all. Understandable given that the early version of Onsen was dependent upon hot springs which are created from volcanoes, which are abundant in Japan — 110 active ones to be exact!

Although the setting of natural hot springs is an experience at least everyone should try once in their lifetime, the day-to-day reality is that most folks in Japan visit communal baths or sento, which is Onsen’s less sexy cousin but equally as enjoyable. Despite the difference in setting, the purifying and wellness aspects are the same — but it should be noted that not all Onsen must be in a remote natural hot spring. The designation these days is based on mineral composition and water temperature. That means you can still Onsen instead of sento if you find the right place. Either way, both feel amazing and have therapeutic benefits for your body and mind.

So how does it work? Firstly, being naked is part of the experience, so you need to fully undress. You can bring a small towel into the bathing area, but that’s it. If you are a bit shy, I encourage you to push your comfort zone a bit. You might find communal nakedness to be a social equalizer. And, men and women are separated, so no leering or looky-loos.

Are you tattooed? Well, that might be an issue. Symbolic of the criminal organization, the Yakuza, many Onsen do not permit people with them, even tourists. However, if you have something small that can be covered you might be okay. Just check in advance.

Join the ritual. Once you have undressed, grabbed your small towel and head into the bathing area it is expected that you rinse your body before entering the water. Most bathing areas have stations that have soap and shampoo. Getting into the Onsen with any soap or dirt is socially unacceptable. So don’t be that person!

Where do you put your towel? No one brings their towels into the water, so feel free to wrap it on your head or just set it down nearby. The mineral content of many Onsen is so high that it has a milky quality to it, so no one is going to be able to see your body once you’re in the water.

Talking, or no talking? As you can imagine this is a space for relaxation, not catching up with your buddies. It is totally okay to say hello but avoid talking. Just chill.

That’s it! You have now been anointed in the Onsen ritual and on your next adventure to Japan you can feel a bit more confident about wading into some new cultural waters. Enjoy!

My Panacea For Homesickness

From the Pacific to the Baltic