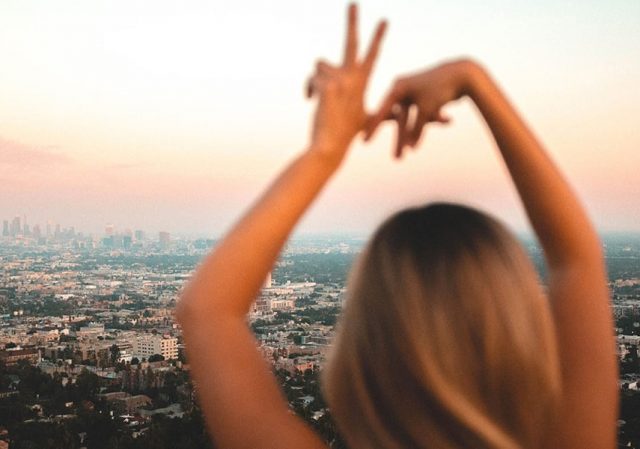 When you’re traveling, time isn’t always a luxury you can afford. You can add more time onto a business trip, or extend a layover—but inevitably, there will be occasions when you find yourself in a new city and you only have a limited window to take it all in. But two minutes might be all you need to take in that historic landmark. In 20 minutes, you can have lunch at that famous café. In 120 minutes, you can tour that iconic gallery. By shifting your sense of time, you can manage it, maximize it, and have a two-day journey that’s as full as it is fulfilling.”

Even if you’ve never visited Los Angeles before, chances are you’ve witnessed its many landmarks in countless movie montages—the glossy streetscape of Rodeo Drive, the stars on Hollywood Boulevard, amateur bodybuilders flexing for tourists at Muscle Beach.

But, here’s what I’ve learned after living in and writing about the city for over a decade: the most well-known attractions in town are often the least interesting things about it. And while that doesn’t necessarily mean ignoring the guidebooks altogether when you visit, a little discerning advice from a local is helpful when figuring out what’s worth your time and what isn’t (especially if you’ve only got a limited number of hours to spend in this sprawling town).

Here, I’ve curated a minute-by-minute itinerary for two days in Los Angeles—grouped geographically, to save you time in the car—with an emphasis on all things culture. Plus, I’ve made note of the tourist hotspots that you can skip, since they often end up being a letdown. (Don’t worry, you can always catch a glimpse of them on a Beverly Hills 90210 rerun.)

Bypass the underwhelming Santa Monica Pier in favor of its recently revamped cousin in Malibu, which boasts a beachfront brunch spot beloved by Angelenos. If you leave your mid-city hotel at around 8am, you’ll have a relatively traffic-free zip up the Pacific Coast Highway. Your reward: organic green juice, breakfast burritos, and vast ocean views.

Yes, this Venice Beach thoroughfare is on just about every list of things to do in LA. But it’s worth checking out, since it’s one of the few truly walkable districts in town, and it’s a visual feast of street art, indie fashion boutiques, third-wave coffee shops, and excellent people-watching (and if you want to spend time in Venice, as most visitors do, it’s a far better option than the loud, chaotic boardwalk).

Before you leave Abbot Kinney, grab some sandwiches from the Gjelina Take-Away (GTA) window. Then, head north for about 30 minutes until you arrive at the Getty Center.

“Every local brings out-of-town guests here, as it’s got panoramic views of the city, green space for picnicking, and galleries filled with contemporary photography and ancient art.”

After freshening up from your day in the sun, head to Hollywood for a visually stunning, mind-blowingly flavorful tasting menu courtesy of beloved L.A. chefs Ludo Lefebvre, Jon Shook, and Vinny Dotolo. Make your reservation for this hidden strip-mall gem a month prior and prepare for fresh California ingredients like you’ve never experienced them before.

You can get a nightcap at a bar in any city. Instead, seek out a show at one of LA’s many legendary comedy clubs, where tons of marquee names got their start (and still pop in regularly). The Largo, Laugh Factory, Upright Citizens Brigade, and The Groundlings Theatre are all safe bets on any night of the week—book tickets in advance to guarantee a seat.

You may have heard that Sqirl has one of the best brunches in LA—and although that’s not untrue, its massive queues make it a little impractical if you’re short on time. Get in and out at this nearby, under-the-radar newcomer, whose breakfast options are just as inventive and delicious (You’ll never regret the avocado toast). and vast ocean views.

L.A. has lots of bigger and more comprehensive museums than The Broad— LACMA and MOCA, to name just two—but this one’s smaller footprint makes it less overwhelming if you don’t want to spend all day looking at art. Book your (free!) tickets in advance and you’ll be able to see the philanthropic Broad family’s impressive contemporary collection in about an hour.

“L.A. has lots of bigger and more comprehensive museums than The Broad— LACMA and MOCA, to name just two.”

Downtown L.A.’s Arts District is one of the city’s most dynamic, up-and-coming neighborhoods. The best way to see it? Through the lens of its food and street art. Book a private tour with this family-owned company to sample dishes from the ’hood’s killer restaurants—and to check out its many Instagram-worthy murals (This is definitely better than a movie backlot tour).

Skip the stars on the Walk of Fame in favor of actual stars—both in the sky and on the stage. May to October is the prime season for an outdoor concert at the Hollywood Bowl or Greek Theatre, or an ’80s/’90s film screening at the Street Food Cinema events, the Rooftop Cinema Club, and the Hollywood Forever cemetery. Visiting during the off-season? Get your after-dark culture fix at Downtown L.A.’s historic theatres, like The Wiltern, The Regent, or The Theatre at Ace Hotel.

Two days—48 hours—doesn’t seem like a lot. But what if you change your mindset: what if you think about it as 2,880 minutes? You can’t alter the passage of time, but you can change how you calculate it, perceive it, and use it.

Make the most of every minute in L.A. with these local favorites, and check back next month for the our Local Time series: Toronto.

A Day To Be Pigged Out