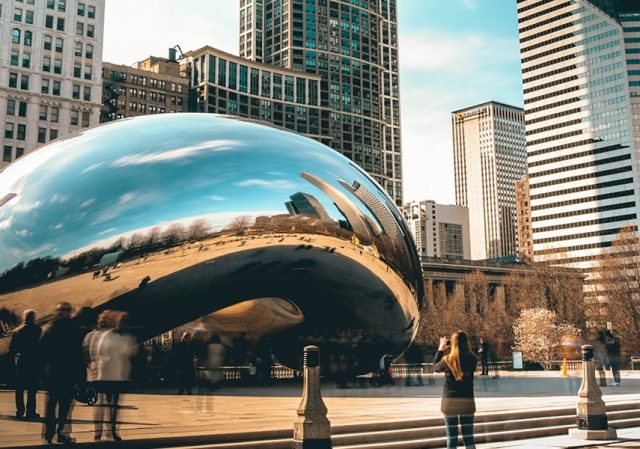 When you’re traveling, time isn’t always a luxury you can afford. But two minutes might be all you need to take in that historic landmark. In 20 minutes, you can have lunch at that famous café. In 120 minutes, you can tour that iconic gallery. By shifting your sense of time, you can manage it, maximize it, and have a journey that’s as full as it is fulfilling.

Chicago: home to the Cubs, world-class architecture, deep-dish pizza, Kanye West, and the Obamas. It is the third most populous city in the United States with 2.7 million residents and 26 miles of lakefront. Though it doesn’t touch an ocean, Chicago is referred to as the “Third Coast” thanks to the 22,000-square-mile Lake Michigan that borders Illinois, Wisconsin, Indiana, and Michigan. Sophisticated and welcoming, and boasting as much culture as it does culinary treasures, the crown jewel of the midwest is well worth an extended stay—but you can sample its best offerings in 48 hours.

Somerset breathes new life into the 1928 Cedar Hotel, now Viceroy Chicago, where Michelin-starred chef Lee Wolen champions brunch classics and “food people like to eat” with a modern twist (think smoked beet tartare, french toast with strawberries and pistachio, and Negroni cocktails). Both the menu and the decor offer an important lesson in honoring your roots while welcoming the future—something you’ll see reflected in Chicago’s skyline, streets, and public parks.

“No trip to Chicago is complete without a visit to Millennium Park.”

No trip to Chicago is complete without a visit to Millennium Park. An extension of the 319-acre Grant Park, Millennium features an unparalleled collection of public art, including Cloud Gate (perhaps more familiar as “The Bean”) and Crown Fountain. Check out a free show or yoga class at Pritzker Pavilion, stroll through Lurie Gardens, or throw a coin in the nearby Buckingham Fountain.

Across from Crown Fountain (two 50-foot towers featuring video footage of Chicago residents spitting out water) sits the historic Chicago Athletic Association. Head up to the thirteenth floor for lunch at Cindy’s Rooftop and take in the birds-eye view of Millenium Park while enjoying cocktails from the city’s best bartenders. After lunch, stop by the retro Game Room on the second floor for a game of pool.

“Shakespeare once wrote, ‘All the world’s a stage’, and Chicagoans take this literally.”

Bypass the touristy Navy Pier to walk along the Chicago River. The city’s new Riverwalk offers convenient restaurants and bars, kayaking, architecture tours, and pier fishing. If wine is your thing, be sure to stop by City Winery. Beer drinkers, on the other hand, can find Goose Island, Half Acre, and Revolution on tap at Chicago Brewhouse; for dinner, try the famous foot-long Chicago-style hot dog (half hot dog, half Polish sausage).

Shakespeare once wrote, “All the world’s a stage”, and Chicagoans take this literally. You’ll find stages in unexpected corners all over the city; empty storefronts, historic buildings, warehouses, ‘L’ stations, and city streets are all venues for the risk-taking theater artists of Chicago. Challenge yourself to resist the allure of popular touring acts like Hamilton or Book of Mormon and seek out local productions at Lookingglass, Steppenwolf, and Chicago Shakespeare Theater. Can’t decide what to see? Read reviews from the Chicago Tribune’s Chris Jones or prodigic 14-year-old theater critic Ada Grey.

Chicago loves its doughnuts; find the best ones at Stan’s. There are nine locations scattered across the city offering an array of decadent flavors with names to match: from Dreamsicle Bar to Blueberry Bismark, there’s something for every peckish traveler. Get yourself a sweet treat and fuel up for the day with a cold brew made by Passion House Coffee Roasters.

Hop on one of Chicago’s iconic Divvy bikes and go for a ride on Lake Shore Drive, or as the locals called it, LSD. The drive comprises 18 miles of lakefront trails complete with sweeping views of the city’s almost 200-year-old skyline. As you head North, be sure to stop at one of the many parks and beaches for a vantage point of Chicago’s unique skyline: a blend of modern architecture juxtaposed by 100-plus-year-old buildings.

“Pequod’s is famous for its buttery, caramelized crust and layers of chunky tomato sauce over mozzarella cheese.”

Work up an appetite by biking to Pequod’s Pizza in Lincoln Park for a slice of Chicago’s trademark deep-dish pizza. Pequod’s is famous for its buttery, caramelized crust and layers of chunky tomato sauce over mozzarella cheese. Come for the deep dish but stay for the casual, relaxing atmosphere; pair your pizza with a local draft beer to cool off from your morning excursions.

Hold onto your handlebars and pedal to the 100-year-old Garfield Park Conservatory—one of the largest in the U.S., with two acres of greenery. Wander through the foliage and feel the transformative and restorative power of thousands of plant species housed across eight indoor garden displays.

“Wndr revamps the traditional museum setup and invites you to see, touch, engage with, and take pictures of its rotating installations.”

Next, visit Wndr Museum in the West Loop neighborhood for an interactive art experience: Wndr revamps the traditional museum setup and invites you to see, touch, engage with, and take pictures of its rotating installations. Resist taking the iconic selfie in Kusama’s Infinity Room by going in without a phone or camera to distract you (and then pop back in a second time to get that must-have shot).

Logan Square’s Lost Lake, inspired by the original Don the Beachcomber bar, is the place to go for inventive twists on tropical cocktails (the Bunny’s Banana Daiquiri comes dressed with a dolphin-shaped banana, for instance). If your stomach starts grumbling, executive chef Fred Noinaj has you covered with stellar Thai-fusion eats including the General ’Tso Boy (a po’ boy sandwich with General Tso’s chicken) and Coconut Shrimp Toast.

Chicago is known as one of the great comedy hubs in the U.S. If you only have one night to see a show, head to The Second City. Their comedy school has propelled countless comedians into the limelight, with an alumni roster that includes Tina Fey and Stephen Colbert. Whether you catch a first-time act or a rising star, you’re bound to leave laughing.

Two days—48 hours—doesn’t seem like a lot. But what if you change your mindset: what if you think about it as 2,880 minutes? You can’t alter the passage of time, but you can change how you calculate it, perceive it, and use it. Make the most of every minute in Chicago with these local favorites, and then check out our local guides Portland, Toronto and Austin.